Mix 2 tablespoons of dark soy sauce, 1 tablespoon of light soy, 1 tablespoon of mirrin, a teaspoon of balsamic vinegar, a teaspoon of sugar and a tiny bit of cornflour in a bowl, and sprinkle in some chinese 5 spice seasoning (which consists of fennel, cinnamon, cloves, ginger and star anise, if you can’t find it on the shelf), and a little cayenne pepper. Then soften some onions in a wok for a few minutes. add some chopped ginger and garlic, and fry fior 30 seconds on a medium heat. add a bunch of chopped veg, like beansprouts, pak choi, chopped carrots, spring onion and sprinkle in a little 5-spice. Stir fry on a high heat for 2-3 minutes. Meanwhile, boil up some egg or rice noodles. Once they’ve boiled, drain them and rinse well in cold water. Add the noodles and the sauce mix to the wok, and stir fry well for about a minute, making sure everything’s nicely covered.

There you go, Chow Mein. It’s literally the easiest thing in the world to make.

I decided to try out a new form of blog post where I detail food which I make. The way I cook is experimental, and I rarely use actual measurements, meaning that you can adjust these reciped to however you like them. I’m probably not going to include photos of all of it (primarily because once I make the food I eat it, rather than saving it for posterity), but if you want to send me some photos of the dishes once you’ve made them, knock yourselves out.

First up: Curry. There’s probably a name for this particular curry, but heck if I know it. It’s sort of halfway between a Rogan and a Dopiaza. Here’s what you’ll need: can of chopped tomatoes, red or green chilli pepper, couple cloves of garlic, fresh root ginger, an onion, turmeric, coriander seeds, cumin seeds, fennel seeds, garam masala, cayenne pepper, salt, maybe some garlic powder, maybe some sour cream, fresh coriander, and whatever stuff you’re putting in the curry (mine are usually vegetarian, so something like paneer, quorn pieces, or even just red peppers and other veg is usually good)

What to do: heat up some oil in a deep pan (I use a wok). slice up the onion and stick it in the pan over a medium heat and leave for a few minutes to soften. Dice up the garlic and ginger and add them, then leave it all for a couple more minutes. Add a bunch of cumin seeds, fennel seeds and coriander seeds, maybe about a table spoon of each. Give it a good old stir and wait till those seeds are popping. deseed and slice up the chilli pepper and add it to the mix. If you’re adding quorn, whack that in too and cook on a high heat for a few minutes, stirring. If you’re using real meat, cook it until it’s browned or sealed or whatever hell else is supposed to happen. Add in any extra bits you want in the curry like vegetables and stuff and give uit a good stir.

Reduce the heat and add some turmeric, and a bunch of garam masala and stir it all in well. The idea here is that you should have all the stuff coated in a sort of yellowy brown spice mix. Add some cayenne pepper, but be careful here –  a little goes a long way. I like my stuff hot so I add about half a teaspoon. If you don’t like stuff hot, I’d suggest leaving this stage out. Now, everything should be coated and the pan should be pretty dry. Open that can of tomatoes and whack it into the pan. Stir it all around until everything’s all good and mixed in, and then add about half a cup of water. Stir it all up and once it’s bubbling, leave the whole lot to simmer for about half an hour, stirring occasionally. You want the sauce to gradually reduce and thicken. About 5 minutes from the end, stir in some roughly chopped coriander, and in the meantime, boil up some basmati rice.

The next bit is optional. Once the curry is done and ready, remove from the heat and stir in a couple of spoons of soured cream. it’s important that you remoive it from the heat BEFORE adding the cream, otherwise it’ll curdle and look rancid. And nobody wants that.

Once it’s all done, serve on a bed of rice, with a garnish of coriander. It’ll probably look something like this: 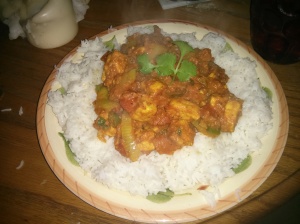 Feel free to try different things out, like adding lemon juice to the onion and garlic, or maybe substituting turmeric for fenugreek. Let me know what works.